The grind, the dogged determination, the hunt flew under my childhood radar. There were meetings and trips and cameras everywhere, dad was often gone. I recall the exhaustion at day’s end, his need to wind down. He had the “all or nothing” attitude, and with him, it was all of everything. He worked best under pressure, fitting for a journalist.

Sadly, I didn’t understand or appreciate dad’s personal sacrifices, what that meant to our family, until after he died. His passion was beyond my scope of understanding. What gives me pause is the blood, sweat and tears dad put into his work, his belief in personal involvement and commitment to his endeavors. The evidence surrounds me and it abounds. 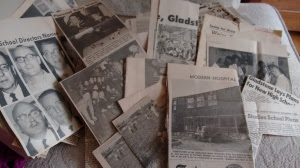 These are a fraction of the clippings sent to my grandparents during the reporting years, most dad wrote. He covered the news but he also made the news, appearing in many of the articles shown.

Dad was passionate about education, not only his and ours, but for all the children in our district, at all levels.

Dad was involved when the planning of the area’s first community college was in its infancy. He was passionate the school be located where it now sits. Dad was concerned about location, traffic flow, generating business in that immediate area (he worked tirelessly on the Oregon City Bypass, an effort to reroute traffic in Oregon City). Eventually, a college was born. At one time or another, three of his grandchildren–my three children–attended that college. One of his daughters–this one–volunteered there as a tutor. He never knew.

He became involved not only with curriculum planning, but the high school itself in the 60s. He was on the school board for several years, serving as chairman part of the time. 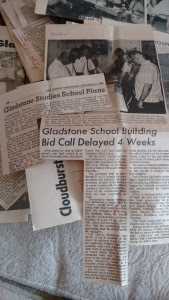 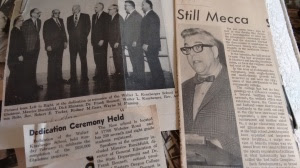 Dad wore many hats, and I am proud of his involvement and accomplishments. Something I never realized, though, was the role our mother played. They were a team in many ways. Who knew, for example, about mom’s contribution the day she helped dad piece together one of the most significant news events in U.S. history?

It was November 22, 1963, and dad worked at The Dalles Chronicle, a small town newspaper. If you are old enough, that date rings a bittersweet bell.

The dak-dakka-dakka-dak was ubiquitous to every newsroom, the machine state-of-the-art. Dad’s reliance on the teletype machine was not new; that it was too slow for dad was the beginning of an unlikely but pretty darned cool sequence of events.

Kennedy had been shot, and dad could not get the news out fast enough.

His idea was brilliant: he called mom, asked her to turn on the television and report back to him events as they occurred live. Between her news and dakka dak dak, he pieced together the events at Dealey Plaza. 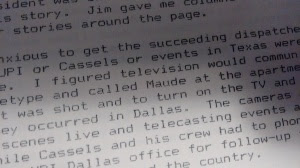 “I figured television would communicate faster than the teletype and called Maude at the apartment, told her the president was shot and to turn on the TV and relay to me events as they occurred in Dallas,” dad wrote.

“Rod called me to tell me the news,” mom says. “It was coming in, but too slow to meet the deadline for the paper.”

While others had to “phone their reports to the UPI Dallas office for follow-up transmissions by the slower teletype around the country,” dad wrote, he relied on live coverage from Dallas to piece together his story. That, and mom.

“Maude telephoned several times,” and “That was most significant,” according to dad.

“We decided that it would be faster if I left our TV on and our phone off the hook,” recounts mom.

“Actually, she helped me put together the Pres. John Kennedy assassination story that morning. Talk about a team effort, that was it. Between the time I originally phoned her and the next forty minutes or so, I had one-paragraph dispatches from Dallas spread all over my desk and was pasting them together in sequential form as Maude telephoned them to me,” dad wrote. 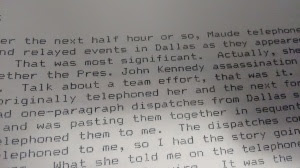 They developed a system. Mom remembers that she “signaled Rod by tapping on the phone” to “relay the information to him.” She tapped the phone or called his name loudly so he could hear her on the other end while he continued to work, the backside of a story.

“The dispatches confirmed what Maude telephoned to me, so I had the story going together from two sources. What she told me on the telephone was confirmed by Cassels and UPI over the wire.” (Louis Cassels was a “United Press International news writer assigned to cover the president while Kennedy was in Dallas.”)

“I don’t remember how long it took, but, together we were able to meet the deadline, and the paper went to press on time,” says mom.

“It was the best of both worlds,” dad wrote. For sure.

I’ve read many of dad’s articles and short stories. The man could write, but on this most significant November occasion, he didn’t do it alone. He had help, and mom must be acknowledged. Her efforts were key to his timely production of a major news event. Appreciation of my father’s accomplishments has grown through the years; understanding and appreciating mom’s have given me new perspective. A seemingly insignificant detail can mean the world.

This, a byline to mom, is long overdue.

In the very early 60s, dad was sports editor at the Enterprise Courier in Oregon City. We lived on Yale Street in Gladstone. Note 1961 above, the date on dad’s debut column The Catalyst.

When Pete King, the then publisher of the Enterprise Courier called and asked dad to return to Oregon City, he jumped, and we returned to Gladstone in the spring of 1964.

I find irony in the title of dad’s column,  The Catalyst. One definition “any entity that produces an effect or is responsible for events or results” reminds me of one very helpful lady.

Below, dad converses with local school children in The Dalles in the very room where he and mom pieced together the assassination story*. It was 1963, the very same year.

*Sadly, after weeks of trying unsuccessfully, I was unable to locate dad and mom’s article. The Chronicle itself does not archive papers prior to 2005, those they do keep are from the late 1800s. The U of Oregon library keeps The Chronicle from the 60s on microfilm but they do not provide a courtesy search. They happily take payments, however, of $60 per hour for a private search.

Kennedy was someone I would have supported had I been older, and I am saddened each year remembering how he died. The following link details JFKs campaign trail up to and after that fatal day.